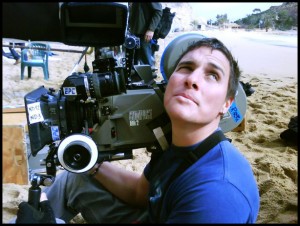 This week we meet ‘Miguel Ángel’, A spanish cinematographer who is working in Ireland. He has recently finished working on a period short film called ‘Staccato’ directed by ‘Eoghan McQuinn’

While studying Still Photography at University in Spain, I became fascinated with cinema and the moving image.

I cannot tell how much I love experimenting with different formats and aesthetics, something that I like translating to the projects I shoot.

We are delighted that Miguel has decided to share some insights when working with the Arri Alexa camera, In this wonderful diary he explains his process from the pre-production stage right up to shooting on the day,  take it away Miguel…

I met the director, Eoghan McQuinn, through a post on filmmakersnetwork.ie a website I always recommend. He was looking for a producer and I sent him an email offering my help and asked him if he had a cinematographer for the project already. His answer was super! and he sent me a very first draft of the script, which I really really loved. After some emails, we decided to meet up and I have to say that I was both, afraid and nervous. When I first meet a director something happens in my stomach, it is kind of a knot plus some interesting feelings very hard to describe. Let’s say that after a conversation with a director, I never know what is going to happen next!

Fortunately Eoghan called me back and asked me to become the cinematographer of his impressive story, Staccato.  And then, the fun began! and we started working together to bring Staccato to the set first and to the audience later!

Our first meet up was around September / October if I do not remember badly and through different conversations, ideas, visual references, moods, movies, etc, we created a style for the project.

I am a very organised person, and as a cinematographer I think that a project this size had to be shot or storyboarded before hand.

There is one thing I do always, I ask for some days with the following people:

When we have everybody on board then we go to the different places where we are going to shoot and the director and myself photograph and shoot the whole piece with a DSLR or a little camera, we put it all together either on a video or on a board. That way, everybody knows what we want to do, if it is possible to do it, what kind of problems we can have and how to solve them, the best time to shoot and the set – ups that we are going to need to tell the story. Also, having all the creative people around you when you are planning your set-ups creates a splendid environment where everybody can offer his or her opinion, filmmaking is a teamwork process!  So it definitely worked for this production.

Thanks to our producer, Caroline Kealy, we were able to secure those fantastic locations that we were looking for! Staccato’s script is dark and very oppressive and it tells the story of two people, one of them is the son of a rich woman, owner of a manor estate, the other one, a less rich character, in fact, poor.

As there were two stories my first thought was shooting them in three different aspect ratios:

At the end of the day the budget of the short film was not that big, in fact it was very very little so I could not get anamorphic lenses. Anyhow, I decided to go ahead with my initial thoughts and shoot the piece as follow:

A little bit about the photography..

In terms of photography each story has its own kind of treatment but at the end when both stories collide and so does the photography. The story of the rich people is more glamorous, delicate, bright, almost high – key and showing the beautiful scenarios that we got. Camera work is also more concise and when the camera moves it does with little dolly movements to emphasise the narrative. The story of the poor people is less subtle, more direct and even rougher. I wanted to differentiate this part with camera work too so the director and myself decided to go hand-held, reacting to the different feelings and actions that the actors could have with movements following the actors trying to get into their minds

Why did I want to get Panavision lenses?

As a cinematographer I am always trying to think about the narrative of the project I am going to shot and how to emphasise it, either with light or texture, maybe movements, perhaps aspect ratio and definitely lenses. I kept thinking about what kind of lenses I wanted to use to tell the story of these two characters and their environment and as I was doing my researches I started to feel that I needed lenses with the best possible contrast (I was going to light the short – film in a very dark way), a fantastic and realistic colour and tones and also they had to had that smoothness that I associated with the story. And then I decided that I wanted the Panavision Primo Prime which were the lenses which ticked all the marks.

To get the most out of them (a very old Panavision Primo Prime set from Panavision Ireland) all the short – film was shot around T4 / T5.6 but two sequences. One of them, shot at T1.9 is just explained below and I used that stop because I could not get the background out of focus in any other way with the tools and the location (there was very little space between the terms) I had. And as I needed to get the background more out of focus I thought, well, let us shoot at T1.9.  The other one was shot at T16 and it was a night. For your information, all the frames are without grading, just the normal LUT applied on DaVinci after getting them from the Alexa. 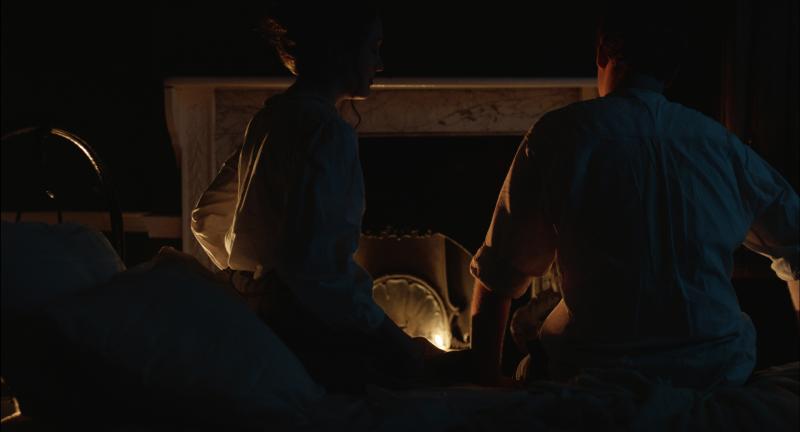 This sequence was shot in a very discreet and easy way (the normal way of shooting it I think – ha!)

First of all we had to find a room with dark walls to use it at “night time”. Once we found the room (in Ardgillan Castle in Dublin) we had two issues: 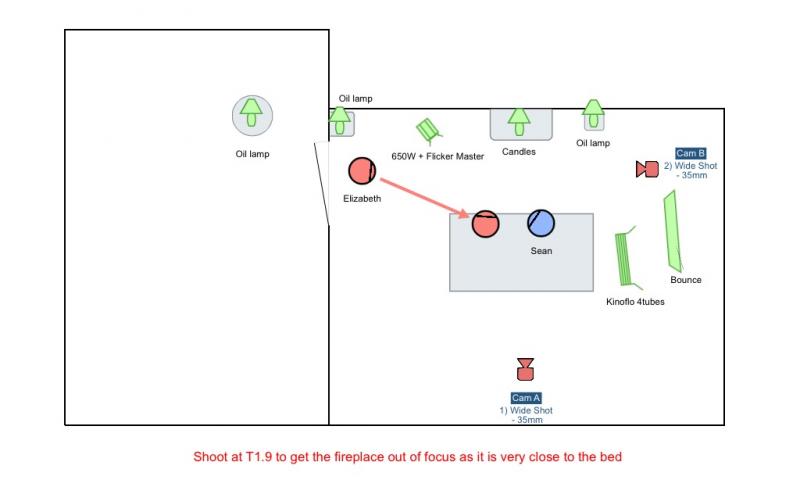 I wanted to get more information in the dark part of the curve so I rated the camera at ASA 400 rather than ASA 800, that way I could have 1 more stop of “darkness” As we knew that those were going to be our problems when shooting, we decided to go with an easier approach, and here is how we lit the sequence.

We don’t have a lot of sun in Ireland, but when it is there, it is beautiful so we tried to get the most out of it in the only day (out of 7) that we could get it. This is what we got. 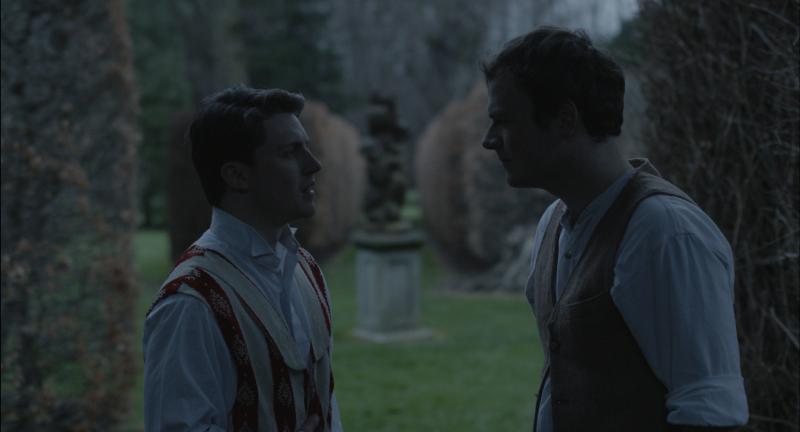 This sequence is a very interesting part of the short – film where two of the characters fight verbally. I love cinema because of a lot of reasons, one of them is that it is something very organic and a super creative process made by a team. This part of the story was shot under a very cloudy sky in the last part of the day. To be honest I wasn’t very sure if I had to shoot or not as I was seeing the actors in front of me while rehearsing and I couldn’t make anything out it. The location was pretty but the light was absolutely dull and boring. After two minutes trying to decide what to do I said: Eh, let’s place a frame with a black silk above the actors so I can add more contrast and a bit of mood. The place was so narrow and tight that there were no space for the tripods so we had to hang the frame on top of the bushes.

There is one thing that I do every single time that I shoot something, I spend one day in each location taking photos and writing notes so I can see how light interacts in the place. Probably because I’m always learning and I need to see and prepare everything in advance. Maybe it is because of the way I learnt to do things under Rodrigo Prieto’s and Janusz Kaminski’s wing.  Hence, after visiting this location and seeing the pics I took, I saw one which was the kind of light I wanted for the sequence, a little bit claustrophobic with a sense of concern / worry (is this the right word?)

And I said: Let’s recreate it with artificial light!

I love finding the right spot to place a light at the very beginning of the sequence, that means that I don’t have to move it ever and I can shoot 360ª if needed. I know that some jobs might need different lighting set – ups for the same sequence or even more lights to shoot properly but at this stage of my life I like lighting places rather than actors or actresses, is it right or wrong, I don’t know, as I said, I’m still learning a lot and my approach might vary in a near future if I keep shooting things, who knows!

This place was full of challenges: 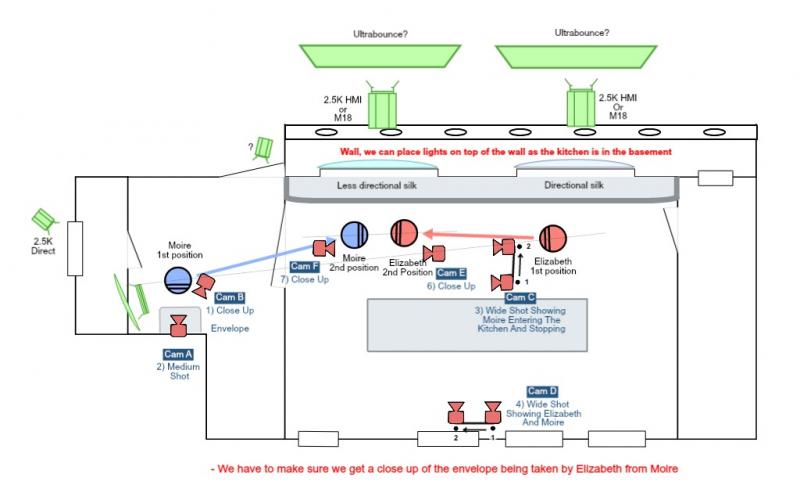 Just some corrections to the diagram:
* I placed 2 x 2.5KW HMI as I knew the M18s weren’t going to give me the T – stop I needed.
* I couldn’t put any silk in the windows (it made sense just for the shoot number 3 but I didn’t have time to do it)
* There is no 2.5KW on the left side because I only had 2. I wanted to use a 575KW HMI but it was broken at that stage of the shooting and I ended up using a Kinoflo (I didn’t like the look of it but…)

The sequence where we got the frame above was a very difficult sequence.

And the diagram below is how we filmed the sequence. 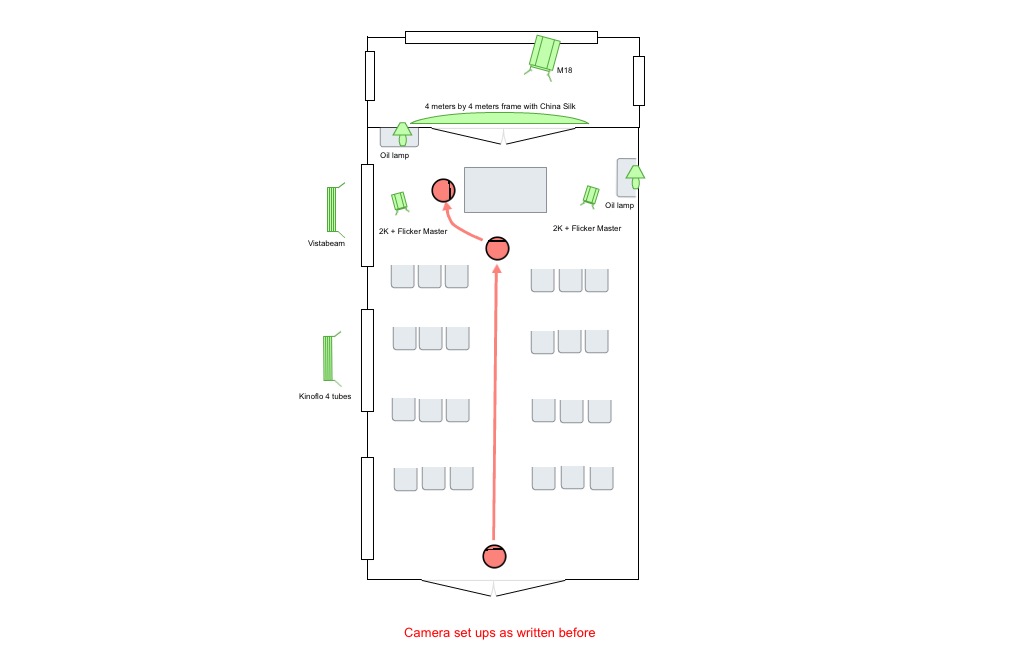 Definitely it was a very difficult piece to create, but we had very talented people working with us in all departments and without them, it would have been impossible to shoot it!

And that’s all! Hope you enjoyed the explanations! The short – film’s information is as follows: