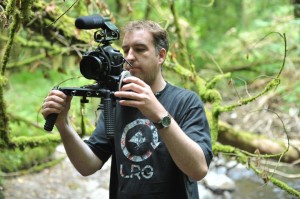 This week we interviewed one of the hardest working camera operator’s and D.O.P.’s in Cork,  Paraic English.

Páraic has worked as DOP on dozens of films, including ‘Hungry Hickory’ (Short Film, Dir. Damien McCarthy) and ‘Penny’ (Short Film, Dir. Patrick O’Shea). He has shot and edited short films, documentaries, adverts, stock and catalogue Shoots in Ireland and abroad. A comprehensive list of credits can be seen on his IMDB page: http://www.imdb.com/name/nm3279826/

Every time I attend a film festival in Munster I see your name on films. Have you worked with everyone in Cork at this stage?

Nope. Cork is so small, crews and cast often overlap over different projects. It’s good for continuity and building working relationships but at the same time I’m always happy to hear new ideas from ‘strangers’ or strange ideas from ‘newbies’.

Are you shooting something at the moment? Can you tell us a little about it?

Ya always working away on something thankfully, it’s wedding season! I enjoy doing short promos, most recently one for an Opera Production, part of the Midsummer Festival. We have some scenes left to shoot for Kevin O’Neill’s upcoming short film too and a trip to the west of Ireland is in the offing soon too to shoot the CFC/RTE Short Script Award Film ‘Leanbh’. Other than that I’m kept busy freelancing for production companies grabbing B-Roll, talking heads and sunshine shots for corporate and event films. Trying to get my head around motion-controlled timelapse for a wee trip in August too. It’s complicated and I don’t have a head for figures.

How important is the script to you?

It’s the blueprint for months of planning and effort as far as production crew are concerned. However, there’s so much room between the words for actor performance, score, camera and pacing that I’m often thankful I’m only a techie. I rarely read it more than twice.

What is your favourite part of the job?

Apart from the early starts and late finishes? Eh, editing. That’s where it all comes together. You do get to see some cool stuff now and again. Film is something that can bring people together so that’s nice to be a part of. 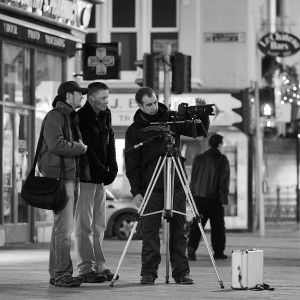 Multi-tasking. Keeping an eye on light continuity, eyelines, shooting for the edit, boom in shot, makeup, shadows, composition, moving the camera, the other cameras, unravelling the slate notes. You get the idea. You’d be knackered after it.

Who would you say your biggest inspirations are in film?

Werner Herzog, Roy Andersson, Robert Altman, Hitchcock, Fellini (for the madness and the moving camera), Scorsese, Orson Welles for Lady From Shanghai alone, I’m partial to a bit of Terence Malick too. Anything Jack Cardiff shot. I like the stylistic touches of Jean Pierre Jeunet & De Palma too sometimes. Roger Deakins is a great storyteller and shares lots of his techniques online too which is great for anyone with an interest. Laurel & Hardy films are always a winner.

What was the biggest challenge on your most recent film? Do you find the same challenges coming up again and again?

Ya always the same challenges. Smaller budgets mean short shoots in locations that often can’t be modified or adequately lit and sadly the lack of technical prep time can have consequences. Compared to the challenges of the production team they pale – everyone does the best they can with what they got. I have lots of admiration for anyone who actually makes a film, it takes a lot of guts.

How much have things changed in your line of work in the last ten years?

Very little. It’s more affordable in some ways to get a good image onscreen but a good story well told will never change. The internet is probably the greatest change. New market and a whole new set of imponderables. 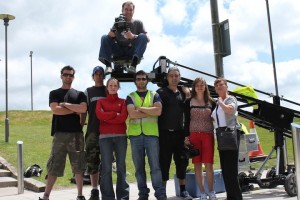 Have you particular advice to give amateur film makers regarding camera work and lighting in their movies?

What do you think of the condition of filmmaking in Cork at the current time?

I’m optimistic. In the past, scripts may have fallen by the wayside but there now seems to be an appetite and personnel to see through projects to a high standard. Lots of distinctive original voices coming through. Ireland is a cinema-loving and cinema-literate nation. My wish would be that this would continue so we can make our mistakes now and if funding materialises in the future we’ll be in a better position to deliver something we can be proud of.