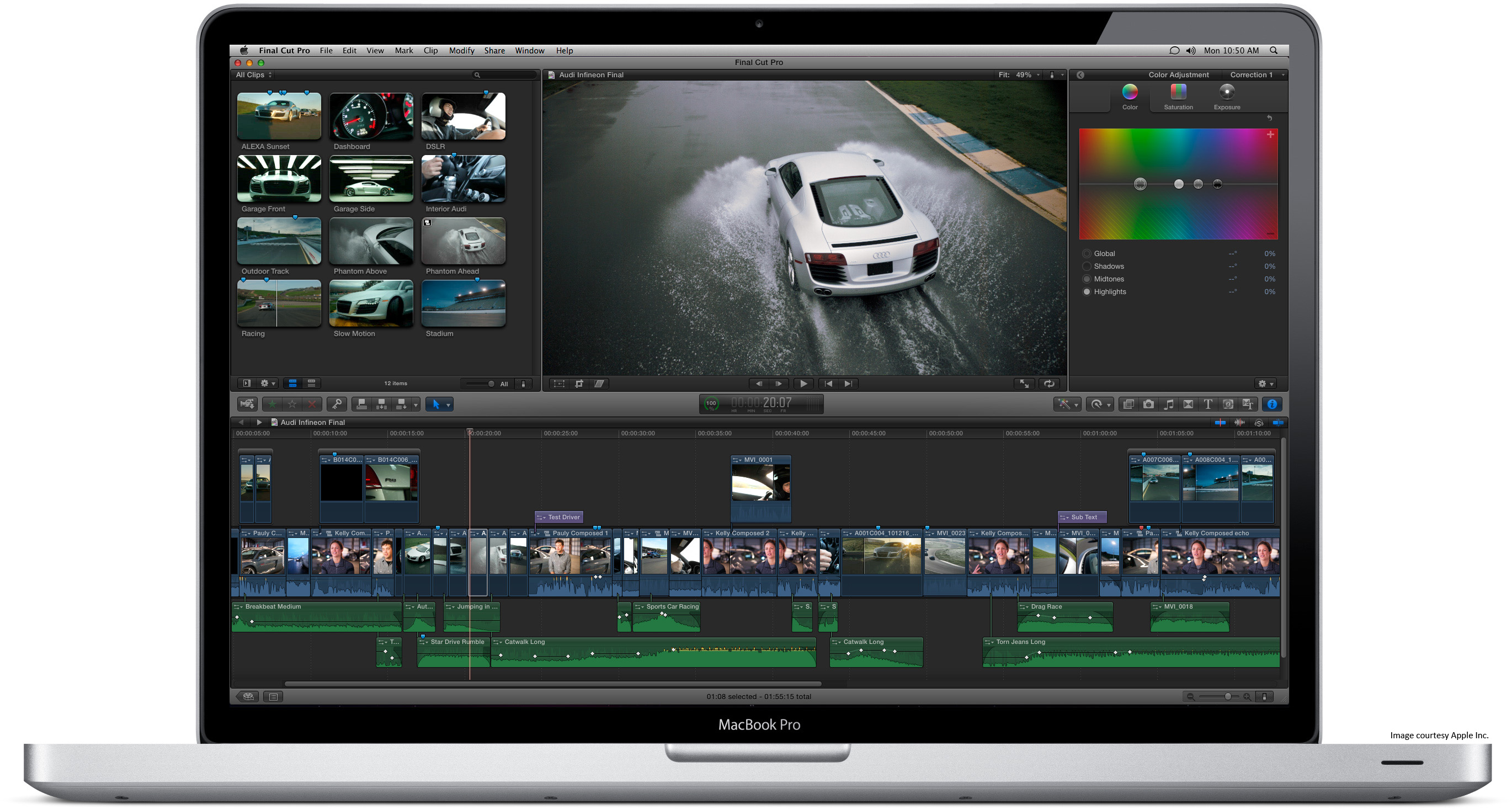 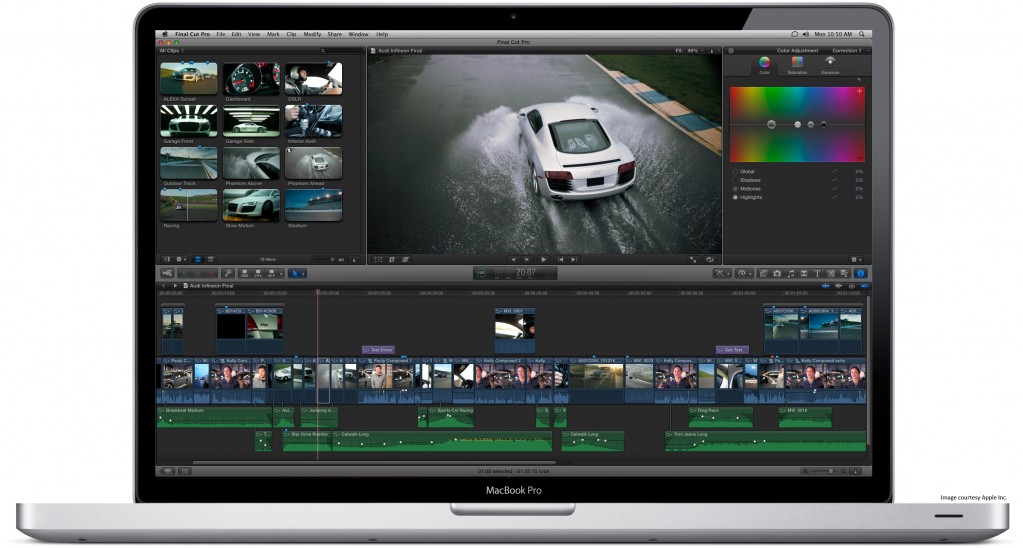 Final Cut Pro X has gotten a lot of bad press recently, and to be honest Im still undecided myself about the huge switchover but decided to give it a bit of an unbiased review.

First off there are things i absolutely hate about FCP X, like the lack of viewer so all your media is now displayed in thumbnails, so you basically scroll through the thumbnail with a preview on the main viewing window but i really used to like how you could place your timeline marker on your sequence to get a preview of an edit point then match the edit point with the new clip i’m currently working with in a separate viewer, but now thats gone!

I also cant stand how it tries to self manage all your media by creating libraries,  it takes stuff on your hard drive and basically rewrites it into another folder, so it duplicates your footage and transcodes it into a bulkier format (422), while a really great codec, it is quite bulky; i even tried to change the default to 422LT but sadly no such luck.

Then theres the magnetic timeline, while i understand the principle of one main track and i do think its probably the way to go, i find it really frustrating not having ultimate control over how it behaves, but to be honest i think this is just down to lack of familiarity.

one other thing that is a bit upsetting it is quite a small thing, but the widescreen filter, before you could keyframe the offset of the filer, now you can’t, it lands squarely in the middle of your shot not way of shifting it up or down. Apple, please fix this one!

The main issues being complained about is the lack of multicam edit, this isn’t really a big deal for me as apple have announced they will be adding this feature in a future update, and also a lack of third party support, which i believe will eventually roll out in the future as well, remember this is a brand new program after all? The biggest draw back for professional editors is the lack of tape support for outputting your edit, I know there are a few work arounds to this but honestly i believe apple are trying to change the industry here for the better. When apple dropped the floppy drive on the imac people were furious, when they dropped SCSI support ( a type of peripheral connection) on the G5 the design and print industry swore they would never use a mac again and said they would have to spend hundreds of thousands of euro to upgrade all their equipment. But apple drove the industry to think differently and to advance to the next level. Final Cut Pro X has done it again, pissed off the pros with their expensive equipment, but looking to the future as apple always has done, then i believe it will all make sense, the industry will move forward, away from tape based media and for those who wish to use this outgoing format stick with an outgoing editing system.

So all the negatives out of the way, whats so good about final cut pro X?

Rendering happens in the background you don’t even notice it! and effects are applied instantly and just look awesome straight away even before they have been rendered they still play back instantly.

Colour control is beautiful, the scopes are awesome, the colour matching feature really does work!  Now while i gripped about the magnetic timeline above, when you sit back and start editing without even using a mouse, couple of quick and easy keyboard shortcuts and your blazing out edits almost in real time. Make an in point an out point and hit ‘e’ the video goes straight to the end of your timeline and snaps into place, continue to edit the same clip or move to the next one and its simple, in, out, e, its really fast. It’s a great way to bang out an edit for sequenced events or to skim through your footage for the best shots and takes then you can go in and re-arrange them to your hearts content.

Auditions, work great and thanks to the magnetic timeline they stay organized. rolling shutter is taken care of as is camera shake, the sound editing facilities from right within fcp is great no need to jump to soundtrack pro(discontinued anyway), nearly everything in soundtrack pro is already built right in, Screen real estate is greatly improved, when your applying filters the controls are now actually usable without having to re arrange your entire layout like before. Lots of built in filters and presets, which would work great for corporate videos and promos without having to have a degree in After Effects or motion. Rendering of Mp3 sound is now working as it always should have and doesn’t clip anymore. Audio and video recored separately? No worries final cut will sync it up for you now.

Threes lots of really great stuff in Final cut Pro X in fact there is some amazing stuff in final cut pro X, this is a brand new version, built from the ground up and the next ten years will prove that apple are more than likely making the right move, its gonna piss people off, it even pissed me off and to be completely honest its a work in progress but the potential is all there, give it a bit of love, a bit of time and I’m sure you will eventually fall in love with Final Cut Pro X 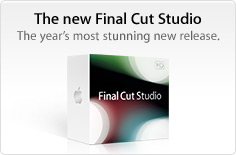 Reports around the web at the moment have rumoured that Apple is planning to release an update to their Final Cut Studio professional video editing package in late April, around the time of the annual National Association of Broadcasters (NAB) conference in Las Vegas.

Lets keep our fingers crossed then…

Final Cut Pro is a favourite amongst independent and low budget film-makers, as it takes advantage of non linear editing and capturing of Digital video and is relatively cheap. But it might interest all of us independent film-makers to know that the same exact tools we are using to edit our short films and documentaries were used to edit the following well known films…