Rock with Your Cork Out @ CIT Arts week !!

For bands and musicians in Cork, we have a special screening of this acclaimed documentary, followed by a music industry discussion with some of the leading names in the business.

Special guests will include:

Ashley Keating : The Frank and Walters

Reports around the web at the moment have rumoured that Apple is planning to release an update to their Final Cut Studio professional video editing package in late April, around the time of the annual National Association of Broadcasters (NAB) conference in Las Vegas.

Lets keep our fingers crossed then…

Final Cut Pro is a favourite amongst independent and low budget film-makers, as it takes advantage of non linear editing and capturing of Digital video and is relatively cheap. But it might interest all of us independent film-makers to know that the same exact tools we are using to edit our short films and documentaries were used to edit the following well known films…

The evening organised by the Music Society of Cork Institute of Technology is scheduled to start at 6pm with a screening of “Rock with Your Cork Out” a documentary (27 min) which focuses on the experiences of young Cork rock musicians.  This will be followed by a screening of extracts from a documentary on the career of Ireland’s first international rock legend, the late Rory Gallagher.  This documentary is currently in production and is brought to Cork by Rory’s brother Donal Gallagher who will also chair the panel discussion following the screening.

The screening and panel discussion will take place from 6pm on Tuesday 24th March in the Rory Gallagher Theatre, Cork Institute of Technology.  Throughout the evening, audience members will be encouraged to ask questions and seek advise from the music experts on the panel.

DJ, Dan Hegarty’s award winning programme will be broadcast live from Cork later that evening and will feature some of the panel guests. 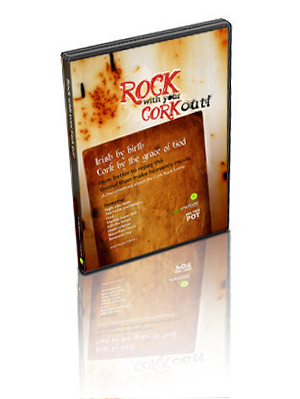 Rock with your Cork out, the feature length documentary about the Cork Rock Scene goes on sale today at Plugd Records.

The southern enclave of Ireland has long had the reputation for rebelliousness and when it comes to music we hate to disappoint. This happy band of rockers dedicate themselves to music with scant regard for trends, haircuts or market demographics. Despite tough times they’ve managed to create a scene where there is now a thirst for live music, an audience for diversity and, in a world where it’s all been done before, a fierce desire to hear something new, something real.

ROCK WITH YOUR CORK OUT includes live gig
footage and interviews with the people who make the scene happen including Stanley Super 800, Snowman, Exit the Street, Anacrusis, Hope is Noise, Fred, Neon Flea Circus, The Frank and Walters, Fight Like Apes and many more.

This film is a must for anyone with an interest in New Irish Music or indeed any musician with hopes of being heard. This is the story of facing insurmountable odds and doing it anyway.
For those of you about to Rock…
We Salute You!

For all of those budding filmmakers that applied to storyland for funding this year and got knocked back, you can now see the shorts that got through and vote.

Many egomotion members had submitted ideas to storyland, which is a pilot web-isode scheme run by RTE, some went on to the next round some got knocked back straight away.  It might be interesting to see which films did get the funding so here is a list of all the ones that did…

Its great to be bitter! Why not give it a go today!